Mayhew Callum are employed by the Yarmouth (Isle of Wight) Harbour Commissioners as Lead Consultant for the second phase of repair works to Yarmouth Pier.

Yarmouth Pier was opened in 1876 and it received Grade 2 listed status in 1975. Originally 207.5m long, it is now 186m but is still the longest timber pier in England open to the public. 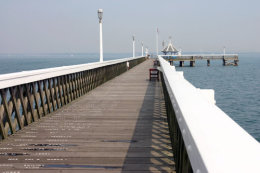 The first phase of the Yarmouth Pier repairs was completed in 2008 and consisted of the installation of 54 new support piles and the removal (by cutting off at bed level) of 54 old piles which had been severely attacked in the low water zone by the crustacean Limnoria (the gribble). Since 2008, the piles which were not replaced in 2008 have suffered from continuing gribble attack, as has the pierhead located at the end of the pier.

All areas of the pier and pierhead not repaired during the 2008 phase 1 are being repaired during this second phase. This will involve replacing the remaining 24 piles along the pier and the refurbishment of some decking. The existing pierhead structure will be dismantled and the existing pierhead support piles extracted before a new pierhead structure, including new pierhead support piles, is constructed. Refurbished timbers from Portsmouth Dockyard Queen Elizabeth Berth are being used. 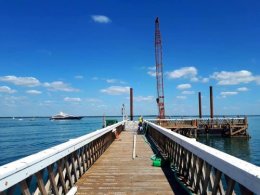 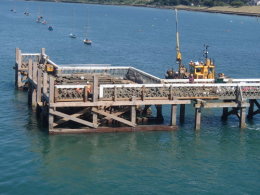